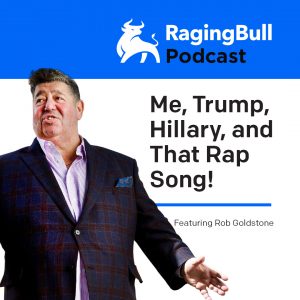 Rob Goldstone is a publicist, author, and music industry expert…

He’s also the guy who infamously arranged the Trump Tower meeting with Natalia V. Veselnitskaya, a Russian lawyer with alleged links to the Kremlin.

Veselnitskaya was a central figure in the whole federal investigation over Russian interference in the presidential election.

You see, Rob was connected to Donald Trump.

And like any good publicist, Rob enjoys a good story!

One time, Rob walked into a room where Trump was sitting and rap music was playing.

Trump sat there holding a platinum record gloating about how the song was written about him and had 94 million views.

Funny enough, Trump loved the song even though it had negative things to say about him!

So join me and jump in at the deep end with Rob Goldstone.